Swimming With the Tide: The Growing Momentum for Drug Policy Reform 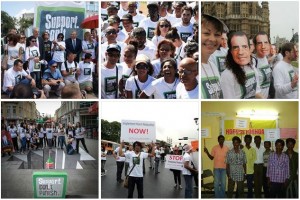 It has been an eventful few months for those of us pushing for an about-turn in the way drugs have been dealt with in society. Drugs have always been a hotly debated topic – but what makes these recent developments exciting is that finally there seems to be a shift in the political rhetoric at some of the highest levels.

For the past 100 years governments have generally followed the same blueprint: “If we’re tough on drugs people won’t take drugs, grow drugs, make drugs or deal drugs – the threat of a criminal record, of a prison sentence, will be enough of a deterrent and we can have a drug-free world”. We now have a century’s worth of experience to know that this simply does not work. All we are doing is putting those who do use drugs at unnecessary risk – causing more harm than the drugs themselves ever could.

Now there is quiet optimism that that political space is starting to creak open. In tandem, voices of dissent are growing in number, breadth and prominence. Russell Simmons (AKA Uncle Rush) got scores of celebrities and business leaders to sign his petition calling for President Obama to end the war on drugs. Through the Global Commission on Drug Policy,former Presidents and world leaders have come together to question the ‘war on drugs’.

Wider public support is also mounting. Last month hundreds of drug user activists, academics, health care workers, lawyers, politicians and students took to the streets in 41 cities from Paris to Bangkok, Nairobi to Mostar in a “Global Day of Action” for the high-profile SUPPORT. DON’T PUNISH campaign, which my organisation, IDPC, is proud to be involved in. The message is simple: stop repressive measures towards people who use drugs and divert energy and resources into much needed health services that reduce the harms and risks associated with drug use. Latin American countries have borne the brunt of the zero-tolerance approach and that is why the strongest calls for reforms come from that region. Cutting the drugs off at source is central to the conventional wisdom of drug control. But this hasn’t worked either – not only have the drug cartels managed to outwit the authorities, drug market dynamics are such that we’re seeing increasing demand for synthetic drugs that can be created in a lab anywhere – without the inconvenience of having to grow plants, extract psychoactive substances and transport them .

It’s no surprise then that political leaders from Latin America are now at the forefront of the debate on drugs. Stirred into action by the futility of spending billions of dollars to fight an unwinnable and increasingly violent war on drugs, sitting presidents from Colombia and Guatemala have been calling for a real discussion on alternative policies. At the same time Uruguay is on the verge of passing a bill to create the world’s first government regulated cannabis market for recreational use. This opening up of the long entrenched and immovable discussion on drugs is unprecedented and will have implications for global policy.

On Tuesday 30 and Wednesday 31 July, I will be fortunate enough to participate in a two-day debate on drugs at the prestigious Chatham House in London. José Miguel Insulza, the Secretary-General of the Organisation of the American States (OAS) will present the reportsthat are the manifestation of the Latin American calls for considering alternatives to the status quo in drug control policies.

The OAS reports represent the first time a high-level political institution has broken ranks with the global consensus on punitive drug controlmeasures and put the need for a serious re-think on drugs on the agenda – including options for the wholesale decriminalisation for drug use and the legal regulation of cannabis .

There’s still a long way to go. The drug prohibition project is far from over.

The UN has set a date for the next big global drug policy special session in 2016 and no doubt there will be attempts to side-line the progress made by the OAS to open up space for dialogue.

Thecomments made last week in Brazil by Pope Francis clearly seek to stall what is a rapidly moving debate and he is certainly not alone in pushing back. The political momentum created by the OAS cannot be allowed to slip away and civil society activism will be increasingly crucial to keep pressing the need for a fundamental change in global drug control. We´re in for an even more eventful few years to come.