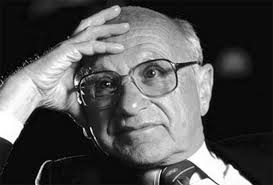 Milton Friedman puts forward a compelling case for the legalization of drugs More videos and information on issues of liberty is available at http://www.LibertyPen.com

Ecomomic professor Milton Friedman puts forward a compelling case for the legalization of drugs More videos and information on issues of liberty is available at http://www.LibertyPen.com

It’s Time to End the War on Drugs

When President Nixon announced a war on drugs in 1972, Nobel laureate and Hoover fellow Milton Friedman attacked the program as immoral and counterproductive. Twenty-five years later, Friedman is more convinced than ever.

Twenty-five years ago, President Richard M. Nixon announced a “war on drugs.” I criticized the action on both moral and expediential grounds in my Newsweek column of May 1, 1972, “Prohibition and Drugs”:

On ethical grounds, do we have the right to use the machinery of government to prevent an individual from becoming an alcoholic or a drug addict? For children, almost everyone would answer at least a qualified yes. But for responsible adults, I, for one, would answer no. Reason with the potential addict, yes. Tell him the consequences, yes. Pray for and with him, yes. But I believe that we have no right to use force, directly or indirectly, to prevent a fellow man from committing suicide, let alone from drinking alcohol or taking drugs.

That basic ethical flaw has inevitably generated the following specific evils during the past quarter century, just as it did during our earlier attempt at alcohol prohibition:

THE USE OF INFORMERS

Informers are not needed in crimes like robbery and murder because the victims of those crimes have a strong incentive to report the crime. In the drug trade, the crime consists of a transaction between a willing buyer and willing seller. Neither has any incentive to report a violation of law. On the contrary, it is in the self-interest of both that the crime not be reported. That is why informers are needed. The use of informers and the immense sums of money at stake inevitably generate corruption–as they did during Prohibition. They also lead to violations of the civil rights of innocent people, to the shameful practices of forcible entry and forfeiture of property without due process.

As I wrote in 1972: “Addicts and pushers are not the only ones corrupted. Immense sums are at stake. It is inevitable that some relatively low-paid police and other government officials–and some high-paid ones as well–will succumb to the temptation to pick up easy money.”

In 1970, 200,000 people were in prison. Today, 1.6 million people are: eight times as many in absolute number, six times as many relative to the increased population. In addition, 2.3 million are on probation and parole. The attempt to prohibit drugs is by far the major source of the horrendous growth in the prison population.

There is no light at the end of that tunnel. How many of our citizens do we want to turn into criminals before we yell “enough”?

Sher Hosonko, at the time Connecticut’s director of addiction services, stressed this effect of drug prohibition in a talk given in June 1995:

Today in this country, we incarcerate 3,109 black men for every 100,000 of them in the population. Just to give you an idea of the drama in this number, our closest competitor for incarcerating black men is South Africa. South Africa–and this is pre–Nelson Mandela and under an overt public policy of apartheid—incarcerated 729 black men for every 100,000. Figure this out: In the land of the Bill of Rights, we jail over four times as many black men as the only country in the world that advertised a political policy of apartheid.

Drug prohibition is one of the most important factors that have combined to reduce our inner cities to their present state. The crowded inner cities have a comparative advantage for selling drugs. Although most customers do not live in the inner cities, most sellers do. Young boys and girls view the swaggering, affluent drug dealers as role models. Compared with the returns from a traditional career of study and hard work, returns from dealing drugs are tempting to young and old alike. And many, especially the young, are not dissuaded by the bullets that fly so freely in disputes between competing drug dealers–bullets that fly only because dealing drugs is illegal. Al Capone epitomizes our earlier attempt at Prohibition; the Crips and Bloods epitomize this one.

COMPOUNDING THE HARM TO USERS

Prohibition makes drugs exorbitantly expensive and highly uncertain in quality. A user must associate with criminals to get the drugs, and many are driven to become criminals themselves to finance the habit. Needles, which are hard to get, are often shared, with the predictable effect of spreading disease. Finally, an addict who seeks treatment must confess to being a criminal to qualify for a treatment program. Alternatively, professionals who treat addicts must become informers or criminals themselves.

The federal Department of Health and Human Services has issued reports showing that two-thirds of all terminal cancer patients do not receive adequate pain medication, and the numbers are surely higher in nonterminally ill patients. Such serious undertreatment of chronic pain is a direct result of the Drug Enforcement Agency’s pressures on physicians who prescribe narcotics.

Our drug policy has led to thousands of deaths and enormous loss of wealth in countries like Colombia, Peru, and Mexico and has undermined the stability of their governments, all because we cannot enforce our laws at home. If we did, there would be no market for imported drugs. There would be no Cali cartel. The foreign countries would not have to suffer the loss of sovereignty involved in letting our “advisers” and troops operate on their soil, search their vessels, and encourage local militaries to shoot down their planes. They could run their own affairs, and we, in turn, could avoid the diversion of military forces from their proper function.

Can any policy, however high-minded, be moral if it leads to widespread corruption, imprisons so many, has so racist an effect, destroys our inner cities, wreaks havoc on misguided and vulnerable individuals, and brings death and destruction to foreign countries?

Click here to see the Hoover project showcasing the works of Milton and Rose Friedman.

Milton Friedman, recipient of the 1976 Nobel Memorial Prize for economic science, was a senior research fellow at the Hoover Institution from 1977 to 2006. He passed away on Nov. 16, 2006. He was also the Paul Snowden Russell Distinguished Service Professor Emeritus of Economics at the University of Chicago, where he taught from 1946 to 1976, and a member of the research staff of the National Bureau of Economic Research from 1937 to 1981.

Originally published in the New York Times, January 11, 1998, as “There’s No Justice in the War on Drugs.” Copyright © 1998 by The New York Times Company. Reprinted by permission.

Available from the Hoover Press is The Essence of Friedman, a volume of essays by the Nobel laureate economist. Also available is Searching for Alternatives: Drug-Control Policy in the United States, Melvyn B. Krauss and Edward P. Lazear, editors. To order these publications, call 800-935-2882.