by Katherine Waldock and Jeffrey A. Miron
Jeffrey A. Miron is a senior lecturer in economics at Harvard University and a senior fellow at the Cato Institute.
Professor Miron earned his Ph.D. from the Massachusetts Institute of Technology and chaired the economics department
at Boston University prior to joining the Harvard faculty. Katherine Waldock is a doctoral candidate at the
Stern School of Business at New York University. 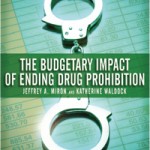