Vientiane, 25 June 2010 – Over 3 tons of illicit drugs seized by Lao law enforcement officers were burned on Friday morning near the Lao National Assembly in commemoration of the 23 rd anniversary of the International Day against Drug Abuse and Illicit Trafficking. This yearly event endorsed by UNODC and its partners marks global effort to combat and control illicit production, trafficking and abuse of narcotics.

In his opening remarks, Lao PDR’s Prime Minister H.E Mr. Bouasone Bouphavanh said: “The Government will concretely pursue its existing policies and measures by focusing on integrated rural development in conjunction with the National Drug Control Master Plan aiming at gradually improving the livelihoods of people in remote areas”.

While the Lao PDR has achieved unprecedented success in dropping opium production and addiction rates to insignificant levels in less ten years from 1998 to 2007 – with respective cultivation and addiction rates dropping by 94.5 and 81 percent, the Amphetamine Type Stimulants (ATS) shock that hit Southeast Asia in the mid-90’s is becoming a seriously challenging matter to the country.

Transformed from a “Landlocked” to a “Land-linked” country due to major improvements in transportation infrastructure, the Lao PDR has become a transit route for transnational criminal syndicates who profit from the country’s central location to move drugs to vast markets.

“The Lao PDR is a country located at the hub of the Greater Mekong Sub-Region, sharing borders with all five countries of the GMS…It is situated between the drug producers and their highly lucrative markets,” said H.E Mr. Soubanh Srithirath, Minister to the President Office and chairman of the Lao Commission on Drug Control (LCDC). 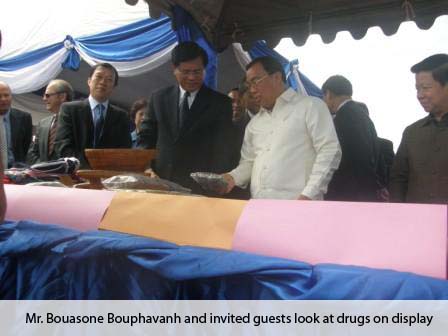 This spillover effect of synthetic drugs transiting through the Lao PDR has created an abuse problem affecting youth in urban centers and along trafficking routes.

“In the Lao PDR, our Government foresees the long-term dangerous impact of drugs on security, stability and national socio-economic development of the country,” said H.E Mr. Soubanh.

In a country where an estimated 51 percent of the population is aged below 21, the ATS problem has been identified a priority drug control issue, affecting people’s health, the social fabric of the Lao society, and the overall National Security and sovereignty of the country.

“The Government of the Lao PDR and its people has made significant achievements in addressing the challenges of illicit drugs,” said Mr. Leik Boonwaat, UNODC representative to the Lao PDR in his opening remarks. “However, recent events have shown that it is important to be ever vigilant. Support to the National Drug Control Master Plan is becoming even more crucial in order to achieve national development goals,” he added. 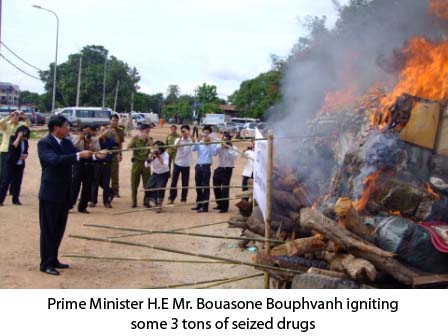 Mr. Leik Boonwaat also shared the United Nations Secretary General’s message at the occasion of the International Day against Drug Abuse and Illicit Trafficking. In his global address, Mr. Ban Ki-moon said that on this day, the world shall reaffirm its commitment to the shared responsibility of providing an environment safe from drugs, corruption and transnational organized crime, for a better life for all.

8.7 kg of Heroin, 985 thousand Methamphetamine (Yabaa) pills, 2.8 Metric tons of cannabis and 176 kg of opium were destroyed in the burning ceremony, in an event that was marked by the extensive attendance of highest level officials from the diplomatic corps, the Government of the Lao PDR and the United Nations.