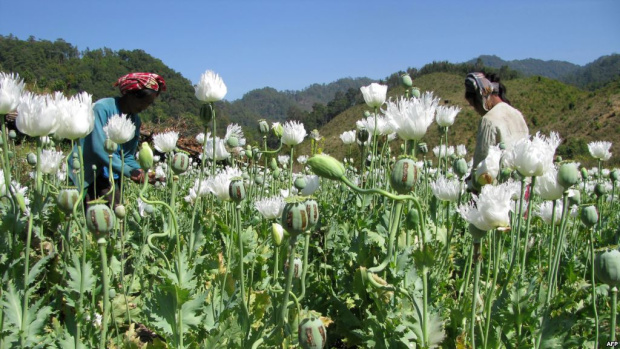 July 2013, the Transnational Institute (TNI) in cooperation with Paung Ku (a consortium aimed at strengthening civil society in Myanmar) held the first Southeast Asia forum of growers of crops declared illicit in Yangon, Myanmar.  As a senior policy officer for the International Drug Policy Consortium (IDPC), based in Bangkok and working primarily on drug issues in Asia, I took part to find out more about the situation faced by opium growers in the region. In the movement in support of drug policies more grounded in health and human rights, a lot of attention has been (justifiably) paid to establishing harm reduction approaches for people who use drugs. However attention is also warranted for people who grow crops declared illicit, who as I learned, can suffer from forced crop eradication initiatives, punitive law enforcement measures and damaging ‘development assistance’ projects. A first step in addressing these problems is the ability for their voices to be heard and to influence the design and implementation of drug and development policies that affect them.

In Myanmar, there are about 300,000 households involved in opium cultivation, and in Laos there are about 20,000 households, according to 2012 figures produced by the United Nations Office on Drugs and Crime. These households are often from ethnic minority groups and depend on opium cultivation for their livelihood, including access to education and health services. They are commonly driven to cultivating opium because of poverty and conflict as recognised by theEuropean Union, which stated: “illicit drug crop cultivation is concentrated in areas where conflict, insecurity and vulnerability prevail. Poor health, illiteracy and limited social and physical infrastructure reflect the low level of human development experienced by the population in these areas.”

At the TNI-Paung Ku forum, growers shared experiences about the benefits of opium cultivation as including basic survival, medicinal use, ease of market access, ease and profitability of cultivation, and even use of opium in taming elephants and violent husbands! They also shared about the negative aspects of cultivation such as the insecurity of growing crops declared illicit, and the rise in crime rates, negative health consequences and broken familial and community relationships associated with dependant use of  opium or—nowadays more often—heroin. By the end of the forum, many growers agreed on recommendations for addressing their situation which called for voluntary drug treatment services, decriminalisation of opium growers, sustainable farming practises, avenues for growers to raise their interests with policy makers, viable alternatives to cultivating opium, and preservation of the traditional and medicinal uses of opium. Some growers suggested that part of the opium cultivation could be legalised and the supply of opium regulated to produce medicines, but perhaps also for traditional medicinal and social uses.

It seemed like South East Asian and South Asian growers have a long way to go before they will be given the chance to contribute meaningfully to drug policy processes. This is partly because of the nature of geopolitics, conflict, politics and drug policies that characterise their environment. For example, the Myanmar government and the regional body Association of Southeast Asian Nations (ASEAN) of which it is a member, both declare a drug-free vision for their drug control strategies—which makes the prospect of partly legally regulating opium cultivation seem like an incredibly long shot. But at the very least, I hope that the realities of life confronted by opium growers in the region will be increasingly recognised and addressed in a humane and sustainable (in development and environmental terms) way by policy makers working on drug issues.